Places to Ponder in the School (and Ones you should avoid) 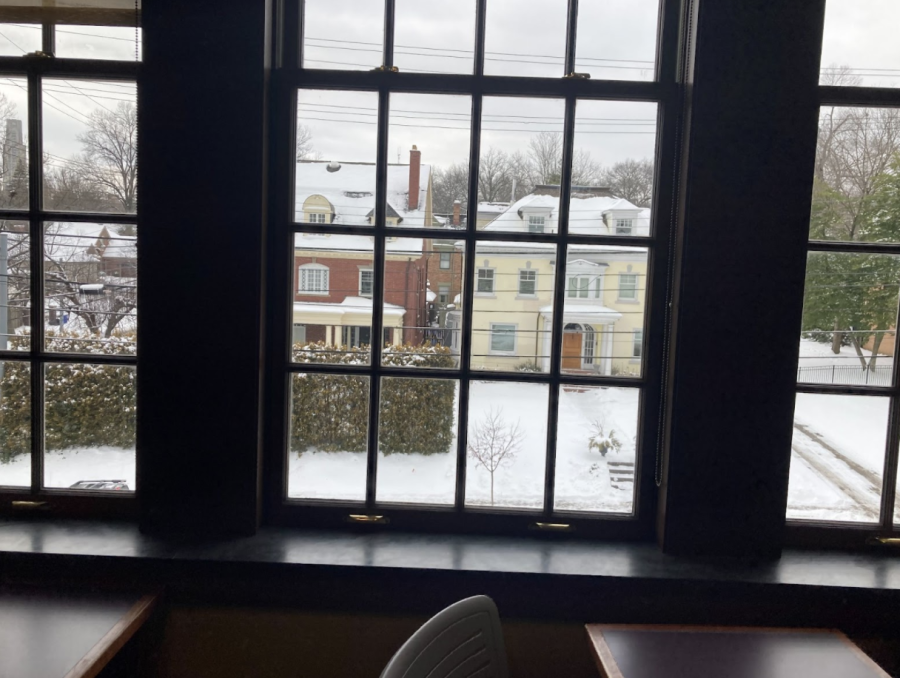 It’s Valentine’s Day, and like many at this school, you don’t have a girlfriend or boyfriend that you embrace or gift with chocolates and pink things. You wonder why the universe is like this, and this train of thought consumes you; you just want to isolate yourself and ponder. Like a normal school, there are things that are more tailored to certain things than others, and the act of pondering is no different. So to help you with your deep thoughts, Voices has made a list of suggested spots where you can sit, act like you are a character of a teen novel or novella, and peacefully swim in your thoughts, as well as others you should avoid.

This one in Ms. Sickler’s CS room is a classic. First, let’s talk about Pitt in the background, a feature unique to this room. This is definitely an incentive to come here. It features the quintessential site of the two houses. One is the classic brick house with a porch cover caked in snow, a gable roof with gray tiles, three dormer windows poking out and a brick chimney. Note the non-brick parts being covered in a nice shade of light yellow bordering on beige, which is pleasant to the eyes.The finishing touches are the black crowbar gate and tall bushes, making one intrigued at what truly is going on within. The other has a hip roof, an exterior akin to a rich, all-natural vanilla ice cream under specific lighting conditions (not the Breyers or Turkey Hill at giant eagle). All of the windows have a pleasant light blue tint, like a shallow wave pool in the ocean, which complements nicely with the white trim, giving the house a modern touch amongst the pillars and door surrounded by intricate glass work. Special points are allotted for the bay windows on the side and the front, where one would imagine themselves adorning the area with pillows. Serious points will have to be docked because there is no longer a dog that sleeps in the yard. But ultimately, both of these give off the same vibe. When you’re in CS and you look out the window, you image yourself clothed in Ralph Lauren plaid pajamas, white Nike-Dri fit socks, and Uggs slippers with a mug of hot coco in hand, looking out of your window at all the poor people below going to work and school because you retired, and your more wealthy than J.P Morgan. Or if you’re not envious of rich people, you look at the people walking below, urban life going on as usual. You wonder how someone this rich can own a house so architecturally bland, and how the lives of rich people are filled with drama, pain, and psychopathy. Or, you don’t think at all. You just watch as life passes by, only understanding that you are bound by life and death. 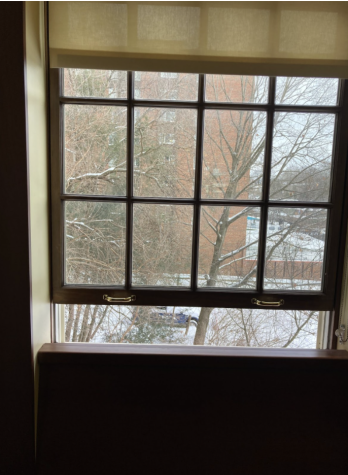 This one’s pretty great too. It’s on the upper floor of the library in between the maker space and the English Faculty Office. For this one, lay your back against the wall separating the room you’re in and Dr. Olshefsky’s desk, and let your legs spread out; putting them straight is too stressful and confining, so keep one up and let the other one dangle, having your toes barely touching the floor. Put your hand on the wood and look outside. There’s Anderson Towers, Where the old lady’s house used to be, and a few trees. If you look hard enough into the windows of Anderson Towers, you can see chairs, lamps, and tables. A lot of the time, you can find children playing atop where the basement used to be, and where they found zombie-spiders infected by fungus. Now, they frolic on the grounds where much pain and suffering was endured.That’s deep. 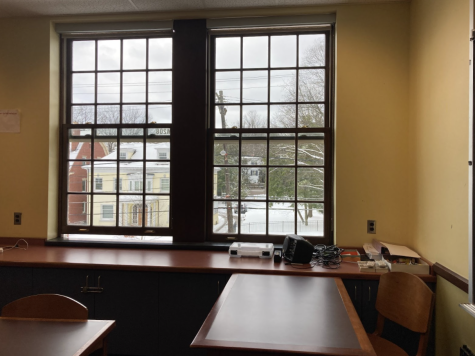 In Ms. Gropp’s room, you’ll find this gem. Many have already said that the cabinets are the best place to sit in the room as they are closest to the view of the ice cream house. But this time, you can see more of their yard, as well as the baby blue and navy house behind it lurking. Winter is an amazing time to admire the snow falling on the trees and the heat waves emitting from the telephone pole. But, I will admit that it’s better to watch in the spring. Sometimes, you’ll see a man mowing with a lawn tractor, or previously, a labrador or golden retriever catching some Zs in the green grass during a nice breeze in the spring. But when you look at this house, there’s many things you can do besides imagining yourself within its walls. With this enhanced view, you anthropomorphize the mini-cooper in the driveway as a nerdy car with no friends that Lightning Mcqueen would take advantage of for years; of course, the mini cooper would become more successful than him while he has a midlife crisis once he’s declared ineligible to race. Or, you could imagine yourself playing basketball with the portable basketball hoop. But essentially, this house offers a lot of substance. Go nuts. 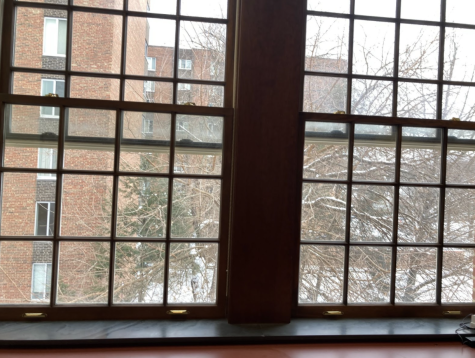 This one’s in Mr. Bachner’s room where AP Lang and American Voices occur. You can see a much more up close and personal view of Amberson Towers and the trees by it. Honestly, this is probably one of the worst ones. It isn’t like the one in the library where you have a great view of tether ball and gaga, but rather just Amberson towers and a bunch of stupid trees blocking it. Most of the time, people sitting by it just haphazardly put their bags there or charge their computers, so most of the time it’s covered by something, forcing you to seek out awkward conversations. Not to mention that there’s already stationary supplies like those weird chargers, tissues, and hole-punchers that already hoard the space to themselves. Along with that, it’s like Mr. Bachner wants people to sit there during class like it’s Freshman year and you’re in Multicultural America. I’d skip this one if I were you. If there’s anything that’s interesting in here, it’s the text people spell out with pins and the August Wilson poster. You’re much better off staring at those. 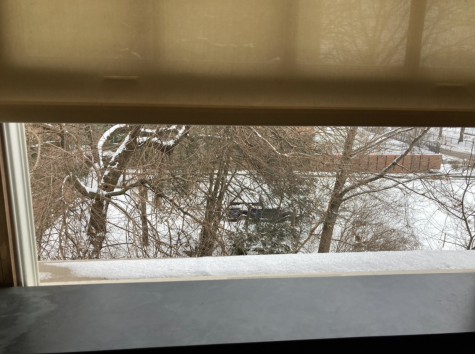 This one calls the Chinese Room home. More of the same from the last one, but it points down so you’re focused on the ground and the trees instead of what’s going on at Anderson Towers. The Chinese room is home to many windows, but this one stands as an anomaly because all of the other ones face the entrance of Anderson Towers, where you’ll hear leaf blowers, see the chain link fence. Sometimes, cars will drive by, capturing your attention momentarily. But this one doesn’t even compare to those ones. It’s also in a place that harder to access and the room, and Ms. Ekeberg will know something’s up when she sees your head turned 180 degrees to look at trees and a garbage can. There are much better options within the school and Chinese Room. Come to think of it, there are no decent windows in that room; you’ll always have to turn your head 180 degrees. With all the other ones, either the teacher encouraged you to sit there or you could hide your face with your bad posture and your laptop. This is the worst so far. 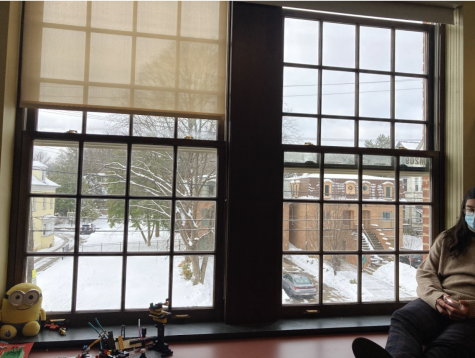 In Ms. Mohn-Slate’s room, as soon as you turn your head to the right, you’ll be greeted with this. Despite the lego builds, literary magazines, and minions with no suspenders, you’ll find that there’s still plenty of room to lie down, stretch yourself out, and then some. My suggestion is to do whatever Q is doing here. Angle your body so that you can use a desk as a footrest and that the edges of the wall aren’t poking you in the back, but that you barely fit in the gray space, making it quite cozy. Note the pair of semi-detached houses outside, with one having a green roof and the other having a brown one. Those houses are essentially visual candy; The circular windows, slightly slanted roofs, and highlights on the window shutters combined with other small details are simply divine. Note the old SUV in Chevrolets in the driveways, which also add a bit of intrigue, conjuring up images of driving back in the 90s and 20s, having “Life is a Highway” by Rascal Flatts cranked up to max volume. The only other places you can find this are in Ms. McDermott and Dr. Seward’s rooms, but both sit behind their desks, and are accessible to students most of the time.