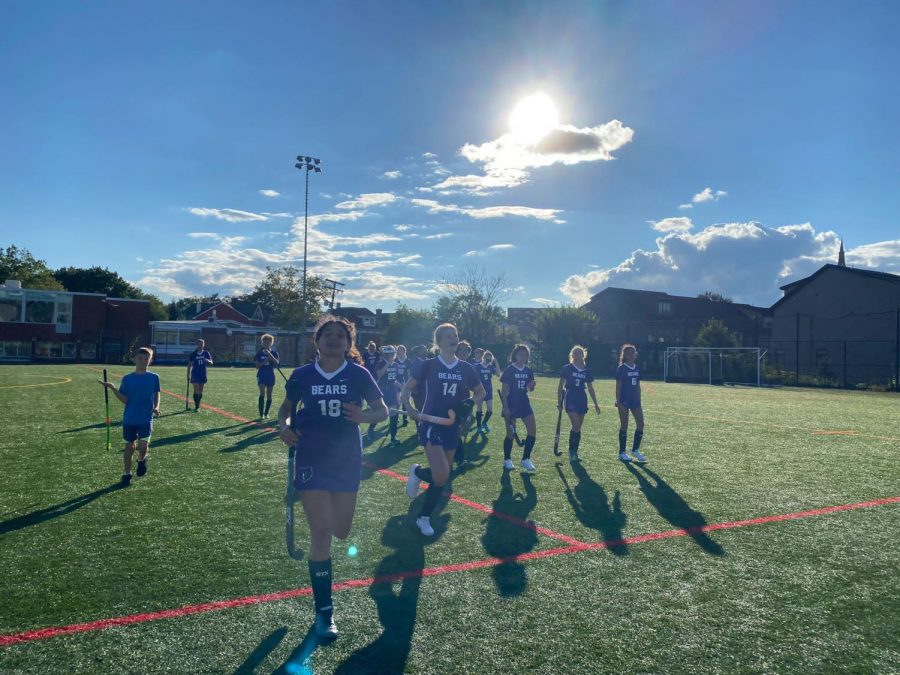 In late August, the field hockey team started preseason off strong with the biggest team in years. Not only were there finally enough players to ease our worries about not having any subs, but the team was made up of people from all four grades. We won our first three games right off the bat, and spirits were high. For the first time ever, we beat Ellis — twice in a row. Talk of playoffs began to stir. One afternoon, the seniors sat us down after practice and told us how they felt this was the best Winchester field hockey had been in a really long time. It was not going to be easy, but if we kept pushing, we had a real chance in the playoffs. Then, on October 13, we found out our team had been disqualified.

We were disappointed, angry, and mostly devastated. Wanting everything to go smoothly, Isla Abrams, one of the captains, had spoken with the athletics department at the beginning of the season to ensure that having a multi-gender team would not affect our qualification in playoffs. Despite what the rulebook said — that mixed-gender teams could not participate in post-season games, meaning playoffs — they assured her that having a boy on the team would not cause any problems, given that nothing came up in the same situation two years prior. However, we had not qualified for playoffs in 2019, and now that we did, our whole team couldn’t play even if the boy on our team didn’t compete. Everyone was extremely frustrated with this decision, given that the outcome did not reflect the huge effort that each of us had dedicated to our team. We were upset at the lack of support from the athletics department. We were upset that our concerns were ignored; if someone had listened, there would not have been an issue. We were upset that adults we consulted failed to double-check the rules, even after being asked. As one teammate explained, “We put a lot of trust into other people…they just didn’t listen to our concerns.” Our voices were not heard, and the decision with playoffs was not the only thing that reflected this.

There were many other instances of neglect that made us feel insignificant and ignored. At the beginning of the summer, seniors Claudia Brelsford, Hannah Brelsford, and Sage Grodin wrote a letter to the school asking them to hire another coach, because the team needed a female coach who could advocate for us when gender-related issues arose, such as catcalling from passersby. Despite advocating for our needs and despite the availability of a potential full-time assistant coach, the team was given a lecture from the athletics department. We were told that our needs were not needs, but rather desires. In the end, we had one head coach and were denied a full time assistant coach. Our two part-time assistant coaches were hired to occasionally attend practices or games. This created much inconsistency in our season that could have been avoided, had the department heard our concerns. This process and outcome sent us the message that we were not important. It told us that speaking up would only result in us being silenced, because we were not worthy of having our voices heard.

We shouldn’t have to be in the weight room the day before a game.”

In addition to this situation, there were many additional explicit challenges throughout the season. For instance, we had a practice cancelled every week because of a conflict with use of the field. We would find out only a few hours before, because no one thought to let us know ahead of time. One time we did plan to go to another field due to a scheduling conflict, but the athletics department forgot to get a bus, and we couldn’t go to the “No Offseason” field. The team improvised and walked a mile and half to Chatham’s field in Squirrel Hill for practice. Another time, we just ended up stretching in the fitness center. One teammate said, “We shouldn’t have to be in the weight room the day before a game,” but there were no other options given the lack of organization and prioritization of field hockey. This negatively impacted our physical and mental preparedness for games. Then, the day before our last game, the school scheduled a parent-athlete meeting to discuss our disqualification from playoffs during our practice time. Not only did this last minute decision feel extremely disrespectful, but the concerns we tried to address during this meeting were not heard. Several teammates had to directly ask the school to apologize and take responsibility for the situation. We should have left this meeting feeling seen; instead, it only amplified our frustration.

While the outcome of our season certainly showcases disorganization, it also displays inequality; our experience is not one that has been universal across all WT sports. For instance, soccer has a huge amount of support from the school — which is great. They have a strict, conclusive practice schedule, consistent emails encouraging students and faculty to come to their games, newsblasts recapping the games, and dozens of fans who attend. Despite the fact that we had so many convenient home games, the school did not promote them, and very few people came to watch. Captain Hannah Brelsford noted, “It’s sour to see other teams being able to continue on to playoffs when we can’t.” The decision with playoffs reflects how our sport is viewed and supported in comparison to others. Although we are a multi-gender team, field hockey is predominantly a women’s sport. “In society and at WT, girls’ sports aren’t looked at the same as boys’ sports, and I don’t think the sports are treated equally, which is why this happened,” she said. An oversight like this would not have happened to a soccer team, because they are a huge priority for the school, and everyone is working to ensure they participate in playoffs. If the athletics department saw field hockey as important and equal, they would have scheduled our practices correctly. They would have paid attention to details and the team would have made it to playoffs. As Breslford said, “Overall, it felt like we were not even second but fifth priority.”

While WT is responsible for the specific outcome of this situation, the rules that led to our disqualification also reflect broader issues around systemic gender inequalities. In the PIAA, the rules state that a multi-gender team must play in the boys league. However, there is no boys league in Western Pennsylvania, meaning that our team cannot compete beyond our section. Not only is this exclusionary, but it also implies that boys are intrinsically better at sports. It suggests that they are inherently so athletically talented that having just one on a team means that the team must compete in a boys’ division, which is purely misogynistic. Field hockey at WT is special because people of any gender can play. It is a sport meant to uplift people, and especially women, which this rule completely undermines. By excluding our team for being inclusive, WPIAL and PIAA leagues are contributing to the issues that women and non-men face on a broader level. Because our school participates in this unjust system, we are contributing to its perpetuation of inequities and exclusion. In the coming years, WT should advocate for gender inclusion within the league, and change this rule with regards to the harm that was inflicted on our team.

Despite everything we faced, we managed to make this a great season. As a team, we lifted each other up through unfair circumstances. Our senior captains Claudia, Hannah, and Sage were amazing — they made Bears for the Cure t-shirts with our names on the back, organized stick buddy exchanges and bake sales, sold wristbands to raise money to fight breast cancer, and constantly supported the entire team through everything. Coaches Callie, Fitch, and Jeannie, as well as our parents and fans, managed to bring positivity when things were hard. While we could have gone further with more support from the school, this is an opportunity for them to recognize how to better support and respect both our team and their students. In the coming years, WT needs to listen to voices who feel less heard, which includes but is not limited to field hockey. To sum up the season, one teammate remarked, “At this point we’re not a team. We’re a family.”